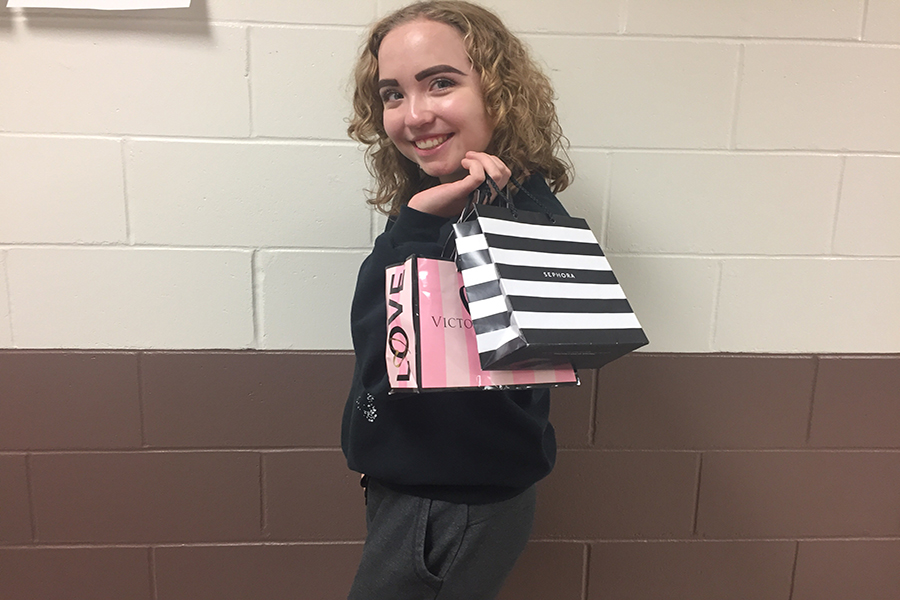 Grace Reiss (11) displays some of her shopping bags from Black Friday weekend.

People are shoving, items scatter the tiled floor, and profanities fill the air. The sun hasn’t risen, but, for many, the amazing deals are worth the 2 a.m. trouble.

This is Black Friday weekend.

The students shopped anywhere from two to three hours up to 19 hours.

“We got yelled at in Menard’s for being in the way as soon as we entered,” Kelchen said.

The rowdy crowds, for most, were the biggest obstacle.

“This lady budged into a biker dude, and they pushed [shopping] carts all over,” Straley said.

Later, Straley and her friends found a quick steal on speakers. “By the time Tanner Kelley’s uncle grabbed one of the last two speakers available, other people saw, and everything became a mess!”

“It looked like an elephant walked through them. They were so disorganized and messy!” Reiss said.

The messes were worth it for the shoppers though. Madison Hanson (10) expressed joy after buying an iPhone for $120, saving over $225.

“I was super excited because of the deal and that my mom was willing to pay for it,” Hanson said. “She told me it was my early Christmas gift!”

Another big steal came from online shopping. Matthew Salas (10) and his family decided to construct their own computer rather than buy one.

“We wanted to build our own PC because it was cheaper with better quality materials for the long run,” Salas said.

Salas picked out the components, and, with the help of his parents, bought the eight parts needed. Thanks to Black Friday, Salas and his family may have spent quite a bit on these pieces, but they ended up saving roughly $350.

Salas believed it was easier for them to “find the parts needed, enter a card number, and wait for the parts to be shipped, instead of waiting in line and shoving through crowds.”

At the end of the night, the trouble for most students was worth it.

“Not only are the deals good, but you can only understand the emotions and the adrenaline if you participate in the chaos,” Straley said. “It’s a once-in-a-lifetime kind of feeling.”

For the Money, Not the Anxiety

Not everyone was ecstatic for the Black Friday deals.

“I’d only been working since this July, so I was stressed and a little nervous,” Bliss said. “Luckily, our management gave us a little game plan beforehand.”

All the workers were divided into sections. Manson and Bliss, being under the age of 18, paired up with higher management for cashiering and monitoring people.

“My biggest fear was being trampled by people,” Manson said.

The crowds, much to their surprise, were very cooperative that weekend.

“There wasn’t too much fighting,” Bliss said. “There was a little bit of shoving here and there for the big items like the 50 inch TVs and video games though.”

The workers were relieved they didn’t have to pull apart anybody during their 5:30-10 p.m. shift.

“Once people got inside, it didn’t turn out to be that bad,” Bliss said.