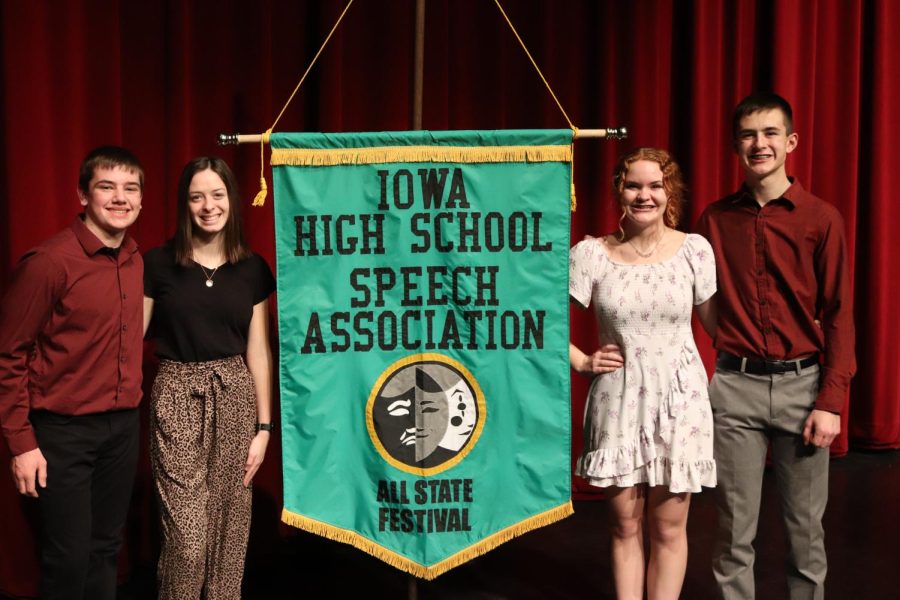 Caleb Stocks (9), Stephanie La Rosa (10), Lexie Rieken (12) and Evan Kartman (10) pose with the All-State banner after being nominated to perform at Individual All-State.

Tips on how to sneak out at night landed sophomore Stephanie La Rosa an individual All-State individual speech honor.

La Rosa performed “How to Become the Cool Aunt” in the category of Expository Address during the individual season. Her speech was inspired by her four-month old niece. In the address, she jokes that she doesn’t want to be the “crazy aunt who only comes around at Christmas and gives the scratchy knit-herself sweater with the cat on the front.”

La Rosa’s group for the large group season also made it to All-State.

“It is different qualifying for a group than as an individual,” La Rosa said. “When I found out that I made it for my group, I felt like it was more exciting because there were other people to celebrate it. Everybody else in my group was a senior, so this was their last chance to make it. I think with individual, it is more of an honor to make it because it’s just you, and you’re not being supported by anyone else while performing.”

Stocks qualified for All-State with “The Life Lessons of a Navy Seal” for the category Public Address.

“I didn’t think going to All-State was ever going to happen, but it was also super cool to be able to do it as a freshman,” Stocks said. “I was going to be really surprised if I made it at all during high school.”

Rieken received her All-State nomination for her Review over Taylor Swift’s song, “All Too Well.” Kartman’s Public Address “Give Me Liberty or Give Me Death” earned him his nomination.

The four nominees will perform one last time at the University of Northern Iowa on Monday, March 28, at the Individual All-State Speech Festival.