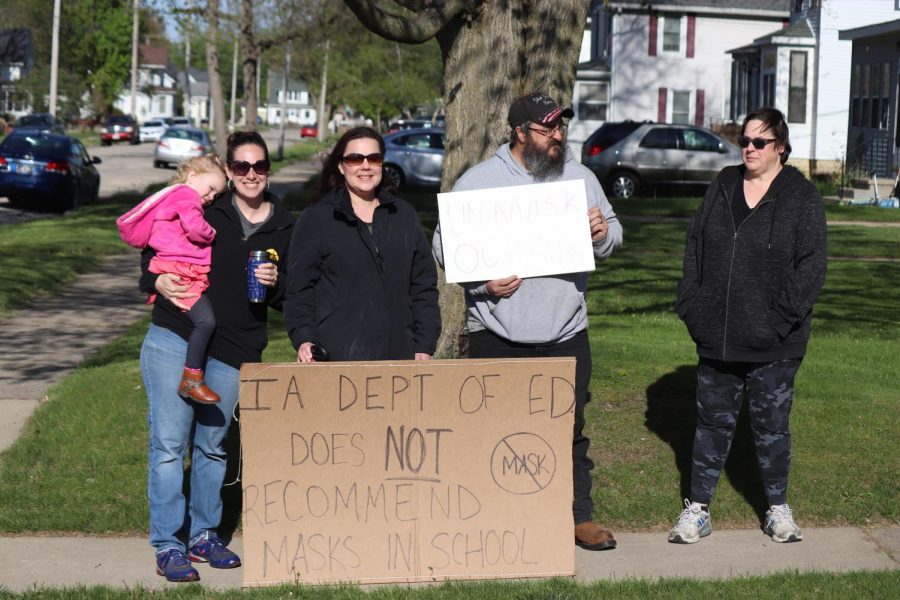 As the school year draws to a close, tensions have been rising regarding mask mandates at West Delaware, culminating in a protest beginning around 8 a.m.

Across the street from the central office, protestors, several of whom are parents, cited personal choice and mental health concerns in their fight against mask requirements.

One protestor, Alexa Eike, says she knows multiple students whose anxiety and depression have been amplified by mask wearing at school.

“My kids hate going to school because they can’t breathe or see their teacher’s face,” Eike said. “They need that physical interaction for their mental health.”

While high school principal Tim Felderman recognizes their concerns as valid, he prioritizes “the continued health of our student body and of our staff as well.”

However, per the Iowa Department of Public Health’s guidelines, if a student is exposed to the virus, the exposed student can avoid quarantine if both individuals wore a mask.

“That’s why we ask students to wear one,” Felderman said. “We wear masks to protect you and to protect me.”

In contrast, protestor and parent Aaron Hutchinson believes “it boils down to personal choice.”

“I’m tired of the students being bullied for standing up for themselves,” Hutchinson said. “My son isn’t allowed to take a math test because he won’t wear a mask to school.”

“These conversations are going on across Iowa,” Felderman said. “Eventually, I hope we will have a mutual understanding of both viewpoints.”

With no confrontation, and several encouraging honks and waves, protestors stayed until around 10 a.m.