Surfing Through the Show Choir Season 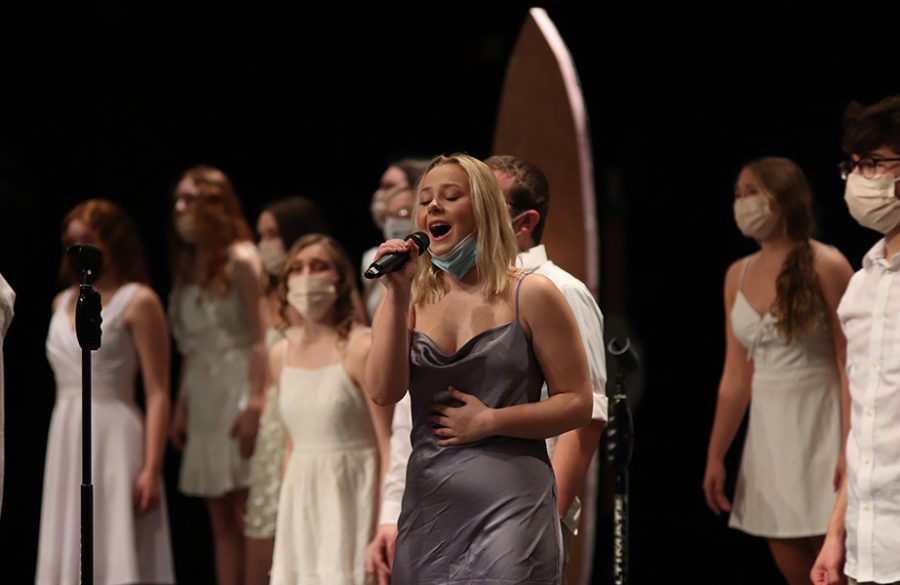 Kaylee Osterhaus (12) belts out her solo in the song "Cool Change."

Forté participated in a successful competitive season despite challenges with COVID-19.

For their first live audience competition, Forté travelled to state show choir at Keota High School on Feb. 1. They earned straight Division I, superior, ratings from the three judges.

On Feb. 27, Forté competed at the Marion Masquerade, with each group allowed 250 audience members. For awards, Forté placed second in 3A and earned second place overall out of 10 groups. They also received Best Band, and senior Kaylee Osterhaus walked off as Best Female Soloist.

Forté performed at Stars in the Spotlight in Fort Madison on March 6 for a virtual audience. They earned a Division I rating as well as three caption awards: Most Entertaining and Most Creative. Director Duane Philgreen won judge Matt Huth’s Aloha award.

Their last performance is the Red Carpet Gala on March 20 at 4:30 p.m. at West Delaware High School.

“Show choir has been so much fun, and I think the whole group would agree it’s been a bittersweet year,” Osterhaus said. “This is the last show choir season our director, my fellow seniors, and I will ever be in, so if you haven’t gotten a chance to check out our show this year, don’t miss out on Red Carpet Gala!”

At Red Carpet Gala, seating will be limited to 350 audience members per group. To watch the show live, get a hold of a Forté member to obtain a voucher or watch the live-stream on YouTube.