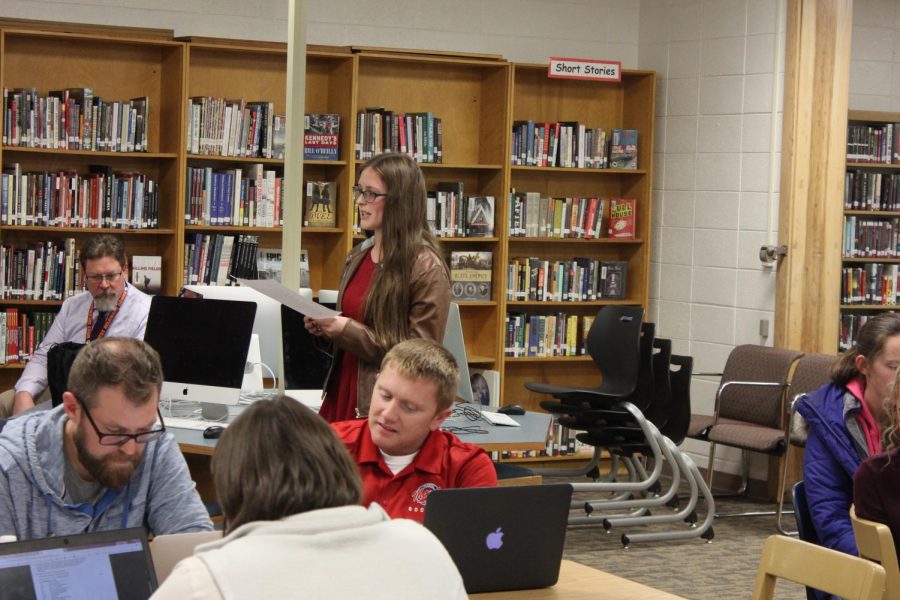 Standing tall at the November school board meeting, senior Annika Sutter explains why she thinks French should not be phased out.

After much discussion, French I will remain in the Program of Studies after the school board voted against phasing it out on Nov. 12.

If the new proposal had passed, current students enrolled in the French program would have been able to complete their French education. However, students wishing to take French I following the 2018-2019 school year would not have been able to do so at West Delaware.

Marianne Sandberg, French and Spanish teacher, as well as several students, attended the board meeting to express their concern. While Sandberg stressed that there were no “bad guys” in the decision to phase out French, she did feel it was not the best decision for West Delaware.

“French is so important that our students deserve a choice (between French and Spanish),” Sandberg said.

Senior Annika Sutter also attended the meeting and told the board that when she traveled to France for a week in September, she would have stood out in France had it not been for the culture she learned in her French classes.

“The cultural diverseness prepared me for my trip to France,” Sutter said. “We have cooked French food and played games.”

Supporting the effort, former student Ben Litterer started a petition Nov. 7 to help spread the word and to let the school board know people care about the French program. Over 350 people signed the petition.

Principal Tim Felderman loved that people fought for the French program to stay, but said the decision made at the board meeting isn’t the end. French I will be offered next year. However, without an increase in funding or enrollment in the French program, French could end up being cut or phased out in the future.

“There is a need for funding in public education,” Felderman said. “The next step for what students can do is to talk to legislators and local representatives. Let them know school districts are having to make tough decisions.”